Your vocation office is in Wisconsin. How do you keep in touch with me if I say, live in Ohio?

In today’s world of communication, we keep in touch via email, cell phone, and personal visits. Also, within our province we have contact friars. These friars live either in your area, or your State. They will keep in touch with you to make sure your questions about religious life are answered, and also aid you in your discernment process. They act on behalf of the vocation director. The vocation director of the province will meet with you several times a year.

As Franciscans, we are all friars, friar-brothers and friar-priests. Sometimes friar-brothers are referred to as lay brothers because they have not been ordained. A Franciscan priest is an ordained friar. His ministerial focus is sacramental (e.g. celebrating the Mass or Divine Liturgy) and preaching the Word of God, while also ministering in other areas such as education or health care . Brothers are also engaged in many different ministries, such as education, health care, ministry to the poor; but are not ordained for sacramental ministry. You cannot tell the difference between a brother and a priest in our community – we wear the same Franciscan habit of penance.

I can't afford to come to Wisconsin for a retreat. What can I do?

The inability to pay should never be an obstacle. Most dioceses have a chapter of Serra International. These men and women are devoted to helping promote vocations to the priesthood and religious life. You might want to call them to see if they could assist you financially in order to attend one of our Live-In retreats or Discernment Weekends. The vocation director will try to provide some other alternatives.

Certainly! St. Francis of Assisi told his brothers to bring their tools to the fraternity. Each man’s talent is a gift and can be used for the enrichment of the brotherhood and the Church at large.

Will I be able to handle studies while I'm in formation?

When a friar begins his course of studies, he is older – and probably wiser – than he was in high school. He is probably more focused, wanting to learn this particular field of study. During his initial formation period, known as postulancy, he will be slowly introduced to academic studies. His formation director will help determine his strengths and weaknesses when it comes to studies. Remember, the friars who guide you in formation will work with you, and there is always a fellow friar in studies to assist you!

What if I make solemn vows, but at some point decide to quit?

When a man comes to us, he is given up to eight years to make up his mind to become a friar minor. No other profession or vocation has this much time provide to make sure a person decides with reasonable and moral certainty. Once you profess solemn vows, you are giving God through the Franciscan brotherhood in the Catholic Church your solemn promise that you will live the vows of poverty, celibate chastity and obedience for the remainder of your life. Too often in our post-modern society people walk out of relationships, or quit when the going gets tough. How many of us have witnessed divorces and seen other relationships dissolve? Life in general has its high and low points. As Franciscans, we make a statement to our world that our relationship with God is permanent, and our vows and the lifestyle we profess are a lifelong commitment. Through our lifelong commitment, we profess that with the grace of the Lord Jesus we can weather those inevitable storms that come about in life. Our commitment is our anchor!

Does celibacy cause clergy sexual abuse?

The simple answer is, no, celibacy does not cause a person to abuse another sexually, or any other kind of abuse. Celibacy is both a gift, a charism, of the Holy Spirit and it is a spiritual and physical discipline. You cannot have one without the other. The fact that so many men and women throughout the history of the Church have served Christ in giving up an exclusive sexual and intimate relationship with another person for the sake of the Kingdom of God is evidence that celibacy is a gift, not a hindrance or a burden. Sadly, we are very aware of many reports that have surfaced of clergy and religious who have apparently credible allegations of having sexually abused minors and vulnerable adults. As the late Pope John Paul II (+2005) stated, they have betrayed the trust of their people, the sacred trust of the Church, and have committed a crime. Concerning Franciscan friars and priests in general, when the number of men who have committed such acts is compared with the multitude of those who have not and have remained faithful to the Lord and to their vows, then the percentage of offenders is very small. While some pundits have attempted to link celibacy to sexual abuse, there is no scientific evidence to support such claims or suspicions. The opposite is actually true – most known pedophiles (those with sexual attraction to prepubescent children) and ephabophiles (those with sexual attraction to pubescent and post-pubescent minors) are married men!

I was sexually active in the past.

We are looking for men who can and want to live chaste celibacy in freedom and can give of themselves to the brotherhood and to the service of God’s Church. As stated above, celibacy is a gift of the Holy Spirit given to the Church for the sake of the Kingdom of God. And it can only be freely received from the person to whom it is given. It has its struggles at times – but so does marriage! Our celibacy enables us to be free to proclaim the Gospel of Jesus and to love beyond ourselves and beyond any exclusive relationship, esp Do Franciscans receive a salary? .

Do Franciscans receive a salary?

Friars who serve in parishes, chaplaincies, schools, counseling, nursing and other works outside of the immediate friary would probably receive a paycheck from their respective employment. Because of our vow of poverty, the paycheck is not our own – it belongs to the brotherhood. We turn our wages and salaries over to the local minister (superior) whom we call the “guardian” according to the Franciscan tradition. All our monies go to “central banking” which is then used for the benefit of all the members of the brotherhood. This would include assisting those who are in initial formation with their education as well as the older and infirm friars who require nursing care and medication. Friars are provided with a monthly allowance. And if there is something special needed – tools, clothing, education – then this is provided by the community. Our poverty witnesses to the world that we live a lifestyle of simplicity and depend not only on the generosity of God (through donations) but also upon the work of our fellow brothers who contribute to the good of the whole community. 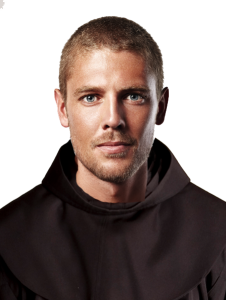 Or this could be you…