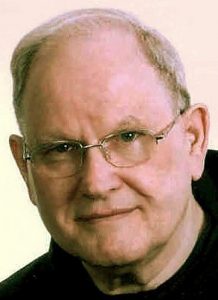 Jerry was born in Chicago, IL, the Windy City on August 21, 1943. His parents, Joseph and Helen (née Graczyk) Tokarz had him baptized at St. John of God Parish on September 12, 1943.  For the first two years of high school, Jerry attended St. Joseph High School, Chicago, IL. In March of 1959, Jerry requested admission to St. Joseph Brothers School, Pulaski, WI where he completed his secondary education and as a tertiary was given the name Aquinas.  He entered the novitiate of the Assumption of the Blessed Virgin Mary Province on August 14, 1962 as a lay brother candidate and was invested with the Franciscan Habit.

After novitiate, Bro. Aquinas was assigned to a variety of ministries including the tailor shop in Lake Geneva, WI, Secretary to the Principal of St. Bonaventure High School in Sturtevant, Wi, to assistant disciplinarian at Archbishop Ryan High School for Boys in Philadelphia. All through this time it was Jerry’s (able to change back to baptismal name) desire to pursue higher studies. He graduated from UW Whitewater in 1974 with a B.S. in Education. While at UW Whitewater, he fell in love with the academic world and quickly found himself applying to Villanova University, earning an M.A. in Modern European History in 1982 and an M.S. degree in Counseling and Human Relations in 1990. He went on to apply, and was accepted, at Gwynedd-Mercy College, Gwynedd Valley, PA. where he received an M.S. degree in Educational Administration in 1999. For over 30 years, Jerry found himself in academic settings.

In the course of his work in education, Jerry’s colleagues were deeply impressed with not only his academic prowess, but also his ability to walk with his students. Megan Brown, Pastoral Counselor at Gwynedd-Mercy College wrote, “In the fall of 1997 one of the student athletes died very suddenly in the college cafeteria.  Needless to say, this experience deeply affected the entire college community, but most especially the students in the residence hall. Throughout the ordeal, I watched Brother Jerry handle distraught parents and students with sensitivity and compassion. His keen sense of humor and sharp wit lightened many a serious moment! His credibility with faculty, staff, administration and students is unquestioned.”

As his health declined, he sent the following to his readers:

As you have noticed, I’ve been offline for several days due to health issue. That which plagues me has taken a little step to remind me s/he’s in charge. The step was enough to move me from the friary into an assisted-care facility in Milwaukee at Wisconsin Milwaukee Catholic Home, which occurred last Friday. Medically, I’m living with pulmonary fibrosis, which is, basically, my lung capacity is getting less and less able to hold oxygen. The doctors who work with this devil tell me, they know less about this disease than they need to know and so … there are no cures! My next birthday will be my 80th.  Whether I see it or not, is of no consequence.  The Good Lord has blessed this servant with a good life, a life a good person should have received instead. I can only be grateful for the many good people whose paths He crossed with mine.

So, I’m just alerting you to the fact that I’m back and will be online tonight with tomorrow’s issue of Today in History. I will not send the issues. If you want any of those missed days, drop me a line and I’ll zip it/them over. Again … if you do not want these “peeks to the past”, let me know and I will remove you from the list … no explanations necessary. Thank you for your patience, support, and interest. You were all good students!”

In 2017, Jerry was transferred to Queen of Peace Friary, Burlington, WI where he lived until 2022. After a great deal of struggle, Jerry, along with Bro. Craig Wilking, Guardian of Queen of Peace Friary, made the determination that, it would be best for Jerry to transition to the Milwaukee Catholic Home where his care would be better managed. This transition was not long lasting. On Tuesday, May 3, 2022, Sister Death welcomed Jerry home.

Jerry died in the 78th year of his life and the 58th year of is religious profession.

May he and all the faithful departed rest in peace.