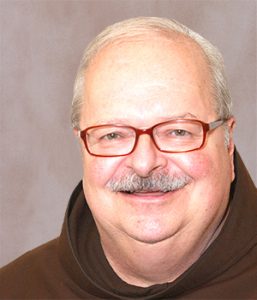 From Poland to Canada to Guatemala to the US Provinces, Steve Malkiewicz was the name synonymous with Liturgy. From the Chapter of 1968, Steve has been the “go-to” guy when it comes to anything liturgical. Our communal prayer as an ABVM Province has been shaped in large part by Steve.
But his story begins much earlier. It was in Passaic, New Jersey on August 1, 1942 that Stephen and Jean (née Kurgan) Malkiewicz welcomed their first born son, Stephen, Jr. into the world. He attended St. Stanislaus parish parochial school, Garfield, New Jersey. And with a budding vocation he chose to attend St. Anthony of Padua Minor Seminary and High School, Watkins Glen, New York, owned and operated by the Friars of the Assumption of the BVM Province, Pulaski, Wisconsin, graduating in 1960. Steve entered Queen of Peace Monastery & Novitiate, Lake Geneva, Wisconsin on August 14, 1960, receiving the name, Jeremy. He made first profession on August 15, 1961 and professed Solemn Vows on August 15, 1964. After completing his theological studies at Christ the King Seminary, West Chicago, Illinois, Steve was ordained by Bishop Romeo Blanchette on May 31, 1969.

His first assignments after ordination would be in education as a teacher. He was assigned to Archbishop Ryan High School, Philadelphia, Pennsylvania from 1969-1970 and then on to St. Bonaventure Minor Seminary High School, Sturtevant, Wisconsin from 1970-1971. But Steve’s intense love for learning and his passion for all things liturgical caused him to write for permission to enter the world of academia at the University of Notre Dame, South Bend, Indiana. For the next three years he immersed himself into the work of earning a Master’s Degree in Liturgics. With this degree, Steve was assigned to initial formation at Tau Fraternity, Milwaukee, Wisconsin for three years. There he began to influence future friars in the love of the Church’s liturgy.
Steve also had a yearning to explore his Polish cultural roots. In 1978-79, Steve was given permission to travel to Poland and enroll in the Jagiellonian University, Cracow. There he earned a certificate in Polish Studies. It was also an opportunity to explore the Polish roots of the Assumption BVM Province.

Returning to the States, Steve once again entered the teaching arena. This time on agraduate level, he taught Liturgics and Sacramental theology at St. Mary of the Lake Seminary, Mundelein, Illinois. It was at his time that Steve connected with the friars in Canada and found himself traveling to Edmonton, Alberta as a part-time lecturer during the Autumn Semester and Summer Semester at Newman Theological College from1985-1998.

The Archdiocese of Milwaukee saw Steve as a person who would be able to help form the future priests of the Archdiocese and so offered
him an adjunct position at St. Francis Seminary, Milwaukee, Wisconsin and Director of Worship at the Seminary. In December, 2011, Steve was presented with the Vatican II award for service in Liturgy to the Archdiocese of Milwaukee. It was Archbishop Listecki who said, “Our Church is enriched through your faith-filled service to others and for that, I am exceptionally grateful.” In 2011, Steve was invited to join the faculty of Sacred Heart School of Theology and Director of Spiritual Formation, a position he held until his retirement in 2018.

In 1982, the American Franciscan Liturgical Commission published the “Franciscans At Prayer” as part of the 800th Anniversary of the birth of St. Francis. In 1990, Steve was called upon to chair the Commission. Even after his retirement, Steve eagerly followed the work of the commission in updating the Franciscan Supplement to the Roman Missal.

Throughout his years, Steve was eager to offer a workshop or preach a retreat that would revolve around the Liturgical Year. With the publication of the Roman Missal, Steve created a series of talks meant to help the friars gain a better understanding of the changes contained in the Missal and the theological underpinnings of those changes. He was always eager to talk liturgy and engage in conversations that tapped into his love of the liturgy.

Steve loved the theatre, teaching at the Seminary, good Scotch and all things Polish. But only when sharing these with friends. Throughout his life, Steve valued the gift of friendship and a deep love of family. In her final years, Steve took it upon himself to care for his mother until her death. His lifelong friends rallied to support him in this act of love. To the end, Steve relied not only on the friars for support but also on the friends who surrounded him.

It was the summer of 2018 that Steve felt the need to retire from teaching. It was not an easy decision but one that was necessary. He needed to spend more time dealing with his health issues. After many conversations, Steve realized that Francis and Clare Friary, Franklin, Wisconsin was no longer able to deal with his physical conditions. As so he packed up the essentials of his liturgical arsenal and moved to Queen of Peace Friary, Burlington, Wisconsin.

The virus struck the friars there in mid-December. With his health already compromised, Steve fell victim the COVID-19 virus. After a short stay in the hospital he met Sister Death on January 7, 2021. He died in the 78th year of his life, the 56th year of his solemn profession and the 51st
year of his priesthood.