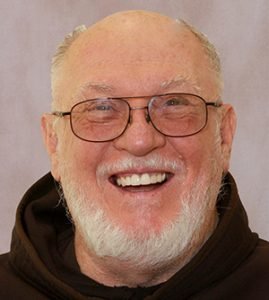 James Francis Kendzierski was born July 23, 1941, the son of Joseph and Angeline (née Garstecki) Kendzierski. He attended St. Casimir Parish parochial school, graduating in 1955. Jim enrolled at St. Francis de Sales High School Seminary, Milwaukee, Wisconsin but left the seminary high school after his junior year. He found several part-time jobs, while living at home.  He soon realized this was a period of transition, and saw his future in some type of church related ministry.

It was Fr. Gordian Strykowski, O.F.M., vocation director for the Assumption of the BVM Province, who met with Jim at the old Chicago& Northwestern Train Station in downtown Milwaukee. It was not long after that meeting that Jim mailed the application and was invited to give Franciscan life a try, an invitation Jim readily accepted. On October 23, 1961, he found himself on the doorstep of the Monastery in Pulaski, Wisconsin, and was greeted by Fr. Michael Lacienski, guardian of the Monastery. While in Pulaski, Jim was invested with the Third Order habit on March 19, 1962, made profession as a Third Order member on March 20, 1963. For novitiate, Jim moved to Queen of Peace Monastery & Novitiate, Lake Geneva, Wisconsin on August 14, 1964, making first profession on August 15, 1965.

In 1966, the provincial leadership decided that the province would begin a more intensive health care program for the senior friars. Brothers interested in taking some nursing courses were asked to submit their names. Many came forward, but only two were chosen: Jim Kendzierski and Austin Mysliwiec. Jim initially shared his infirmary duties with those in the laundry and tailor shop.  As the infirmary filled, he was assigned to full-time care of the elder friars.  In the midst of earning his LPN degree, he petitioned and was granted permission to profess Solemn Vows at St. Francis College, Burlington, Wisconsin on August 15, 1968 and in 1978, Jim earned his LPN from St. Norbert’s College, De Pere, Wisconsin

As a diversion to caring for the sick and infirm as well as going to school, Jim became part of the musical sextet, The Cords, as they called themselves. There were five friars who initially got together for fun.  In 1969, the group cut an album which sold but not enough for a platinum or gold award.  Jim was the vocal portion of the group.

In 1977, Jim approached the provincial about the possibility of ordination.  He was given permission to apply to the Sacred Heart School of Theology in Hales Corners, Wisconsin.  In 1979 he was assigned residence at Tau Fraternity in Milwaukee which housed the province’s pre-novitiate program.  While pursuing theological studies at the Sacred Heart School of Theology, Jim was appointed to the pre-novitiate team together with friars Larry Janowski and Eliot Bacia.

Jim was ordained deacon on April 5, 1981at his home parish, St. Casimir Church, Milwaukee and on October 23, 1981, he was ordained to the priesthood at St. Sebastian Parish, Sturtevant, Wisconsin.

In 1987, Jim believed it was time to move on to other ministries. He obtained a chaplain’s position at the motherhouse of the Notre Dame Sisters in Milwaukee with chaplain responsibilities at Marian Franciscan Nursing Home. But it was a call in 1989 that quickly changed his life.  The Province needed someone to go to St. Sebastian Parish, Sturtevant to be with Fr. Valentine Myslicki.  Jim’s response was,” If you really need me, I will go.  But, I will be just as happy if you find someone else.”  And so began Jim’s ministry at St. Sebastian parish from 1989 to 2007 and was the last Franciscan pastor.

In 2007, the Sisters of Perpetual Adoration, Mishawaka, Indiana, were looking for a chaplain. This became Jim’s next home. He ministered to the Sisters with outstanding dedication and care. But this dedication and care took its toll on him. In 2016, with his strength spent it became necessary for Jim to be transferred to Queen of Peace Friary, Burlington. However, his stay was short-lived.  In 2017, physically unable to manage the life at Queen of Peace Friary, he transitioned to the Milwaukee Catholic Home.  With round the clock nursing care, he was able to find some stability.  But the body was already weak with age and simply could not sustain him any longer.

Jim fell asleep in the Lord on the afternoon of January 31, 2021.  He died in the 79th year of life, the 52nd year of solemn profession and the 39th year of priesthood.

Jim left us with these words,

I have wanted to go nowhere else.

As hard as some of His sayings have been,

as hard as the Rule may have been,

as hard as my life in religion has been at times,

I have wanted to walk with the Lord,

no other path, no other direction.

Pray for me… and

I will pray for all who have touched my life

and all whom I have touched.”

May the soul of James Francis and the souls of all the Faithful Departed, rest in peace.