The most prominent group is the Order of Friars Minor, commonly called simply the “Franciscans.” They try to follow life that Saint Francis led. This Order is a mendicant religious order of men with their origin in Francis of Assisi. It comprises three separate groups, each considered a religious order in its own right. These are the Observants, most commonly simply called “Franciscan friars,” the Capuchins, and the Conventual Franciscans. They all live according to “The Rule of St. Francis”.

Amazing view of Basilica of St. Francis of Assisi at sunset, Umb

The women who comprise the “Second” Order of the movement are most commonly called Poor Clares in English-speaking countries. The order is called the “Order of St. Clare” (O.S.C.).

The >Third Order, or Third Order of Penance, has tens of thousands of members, as it includes both men and women, both living in religious communities under the traditional religious vows, as well as those who live regular lives in society, while practicing the Franciscan values in their daily life.

A sermon which Francis heard in 1209 on Mt 10:9 made such an impression on him that he decided to devote himself to a life of poverty. Wearing a rough garment, barefoot, he began to preach repentance.

He was soon joined by Bernardo di Quintavalle, who contributed all that he had to the work, and by other companions, who are said to have reached the number of eleven within a year. They lived in an abandoned building, “Rivo Torto” outside of Assisi. They spent much of their time traveling through the mountainous districts of Umbria, making a deep impression on the people by their earnest preaching. Their life was penitential emphasizing simplicity.

The brotherhood of Francis succeeded in gaining the approval of Pope Innocent III. What seems to have impressed first the Bishop of Assisi, Guido, and Pope Innocent, was their utter loyalty to the Church and the clergy. Innocent III and the Fourth Lateran Council helped strengthen the church in Europe. Innocent probably saw in the Franciscans as possible answer to his desire for an orthodox preaching force to counter heresy.

The group was tonsured and Francis was ordained as a deacon, allowing him to read Gospels in the church. As the “order” grew and gained influence, it was faced with the many challenges of this blessing, the most urgent of which was maintaining its original purpose and simplicity.

The Franciscans have survived divisions and attacks over the centuries. It has also been blessed with many men who have lived the values of a Franciscan joyfully. Many leaders over the years have helped to keep the Order focused and true to its purpopse and calling. Because of this the Order has spread on every continent and continues to call people to penance throughout the world. 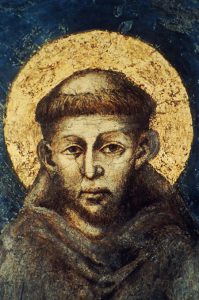 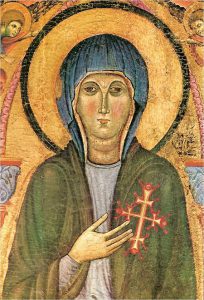 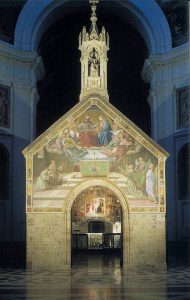 St. Mary of the Angels, Assisi